What’s News in the Agribusiness Sector?

The Australian agribusiness sector continues to be the focus of strong interest from foreign investors, commentators and the Federal Government. Predictions over the last few years have proved reasonably accurate. Although during that time, the value of the Australian dollar has reduced significantly which has been helpful for both exporters and foreign investors in agricultural business and land.

Consultant Tim Ferrier looks at some of the current and emerging issues in Australia’s agribusiness sector.

IS THERE A FOREIGN INVASION?

All of the ingredients are there for a very interesting agribusiness marketplace:

Despite frequent observations in the press to the contrary, these conditions have not yet meant anything like a foreign invasion in the sector. Certainly, there is evidence of significant interest and investment in various sectors – often without any publicity at all.

Greater foreign investment in Australia’s rural assets and land may increase significantly in the relative short term. It is unlikely changes in the Foreign Investment Review Board (“FIRB”) threshold for rural land (now reduced to $15M), proposed changes to the FIRB threshold for rural businesses ($55M) and a new reporting regime for rural investments will make any difference to the incidence of such investment. Foreign investors of the kind likely to invest in such assets are used to scrutiny and compliance.

Of greater interest is the source of the investment. There are the usual suspects from mainland Asia, but it is also quite likely Japan will re-enter this sector after a reasonably long period of stagnation.

One of the most significant emerging issues for the domestic sectors is an age old one – capital itself. There is evidence that major lenders to primary producers in Australia have become nervous about extending their exposure in this area. Their concerns relate to the unpredictable (and often erratic) returns for borrowers in most agricultural commodities plus the considerable question mark over effective succession in the operation of secured assets, ie whether younger generations will take over and continue to run the land.

It remains the case that most Australian grazing and farming enterprises are family businesses. The expectation of traditional generational “baton passing” is breaking down. Lenders are taking notice, and borrowing criteria is tightening.

The approaches taken by the Federal, State and Territory Governments remain mainly benign with odd exceptions for environmental issues (eg tree clearing) and in the case of water. This is unlikely to change in the short term.

For Queensland, one of the important legislative changes has been in relation to the laws concerning the State’s extensive leasehold land holdings. The previous State Government modernised requirements making it easier to freehold land and to roll over leases. This is very important for the marketplace, including for foreign investment.

We understand the agribusiness sector and can assist with a wide range of issues such as acquisitions and disposals of rural property, financing, FIRB applications, and ownership structuring. Are wind farm turbines a fixture or a fitting? Christmas comes early for wind farm tenant in Victoria

Introduction Christmas has come early for a wind farm operator in Victoria with a recent decision in the Supreme Court of Victoria determining in their favor and adding to authority on how renewable energy infrastructure built on leased land (such as wind turbines) is...

END_OF_DOCUMENT_TOKEN_TO_BE_REPLACED ClarkeKann’s commitment to delivering solution-based outcomes for our clients remains at the centre of our offering. Providing qualified, trustworthy, bespoke legal advice with a particular focus across our core areas of expertise; Agribusiness, Intellectual Property...

END_OF_DOCUMENT_TOKEN_TO_BE_REPLACED 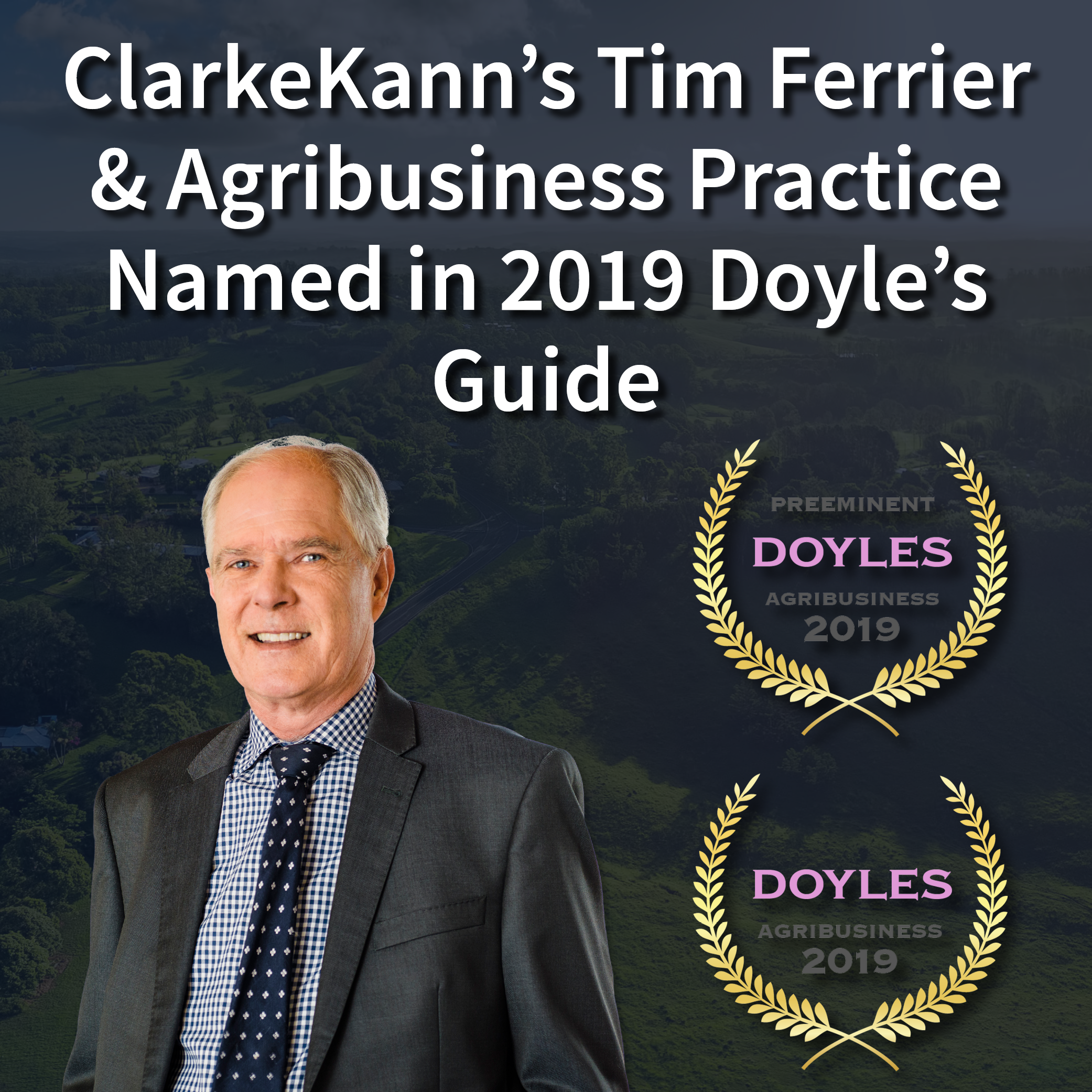